Interview with Brian Staveley: What Does it Take to be an Emperor?

What does it take to be an emperor?

That question is at the heart of Brian Staveley’s debut novel The Emperor’s Blades. In this first of a projected trilogy, Staveley focuses on three siblings. They are the children of the assassinated emperor of Annur, a descendant of the Goddess of Fire whose irises look like flames. Kaden, the designated heir, has spent the last eight years training in far off mountains with monks. He’s physically strong and he’s learned to withstand deprivation. He’s also an expert at drawing pictures, capturing images perfectly in his memory and suffering the abuse of his never-satisfied teachers without complaint. 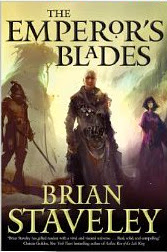 But is he ready to take on the responsibilities of emperor, a position that will require him to hold together alliances, manage a large-scale bureaucracy, and foster the admiration of citizens on two continents? In his interview on New Books in Science Fiction, Staveley describes the three types of tension that power good storytelling: psychological, social, and environmental. “If you’re writing a mountaineering story,” he explains, “the psychological tension might be one character’s fear of heights, and the social tension might be that two of the characters on the expedition hate each other, and then the environmental tension would be that there are constant avalanches trying to destroy them. And I think the stories I like … combine all three of those.”

Staveley also discusses how his experiences teaching ancient history, world religion and comparative philosophy to high school students helped him with world-building, his method for keeping track of his numerous characters and storylines (lots and lots of Word files), and the difficult task his characters face of separating myth from historical fact.

Staveley’s vision is enormous. Not only is The Emperor’s Blades itself intricate and multi-layered, but the author had originally envisioned writing seven books. His editor at Tor limited him to three, and Staveley expects to wrap up the series (known as the Chronicle of the Unhewn Throne) with the final installment in 2016. But with four books on the chopping block, readers can expect eventually to hear more about the world in which these events take places.

“The world is a large place,” he says. “There are always other stories to tell.”