Podcast No. 13: Surrendering to the Apocalypse but not to Crime 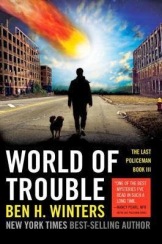 It’s no surprise that when scientists in Ben H. Winter’s The Last Policeman series declare that a 6.5-mile asteroid is going to destroy life as we know it on October 3, civilization starts to unravel.

Governments collapse. People quit their jobs and abandon their families. Survivalists stock up on guns and food, imagining there’s a way to outsmart the impending holocaust. Fatalists sink into hedonism, depression or suicide.

And then there’s Hank Palace, a detective on the Concord, N.H., police force and the eponymous star of Winter’s trilogy. Faced with the end of the world, Palace does the almost unthinkable: he keeps doing his job.

“He’s taken an oath to uphold the law … and to him an oath is an oath, a promise is a promise, and it doesn’t matter what the context is,” Winters says in his New Books in Science Fiction and Fantasy interview.

Palace remains dedicated to his job as he tries to: determine whether an apparent suicide is actually a murder (Book 1); track down a missing person (Book 2); and find his sister, who’s joined a group determined to save the planet (Book 3).

Throughout the trilogy, Winters demonstrates a mastery of two genres, a fact reflected in the awards the series has collected. The first book, The Last Policeman

, earned an Edgar Award from the Mystery Writers of America, while the second book, Countdown City

, was recognized for excellence in science fiction with the receipt of the Philip K. Dick Award, and the third book, World of Trouble

, which was published in July 2014, is a finalist for (another!) Edgar Award (the winner will be announced in April).

Like his main character, Winters likes to be prepared while remaining flexible. “I always start with a pretty good outline and then by the time I’m really deep into the book that outline is more or less thrown away and replaced by a different one,” Winters says. “I have to allow the outline to be there but for it to always be provisional, to always be a work in progress.”Among other topics tackled in the interview are Winters’ optimism about human nature, the art of telling a compelling mystery, and some hints about his next book (a mystery in an alternate or “counter-factual” America).