A Cemetery That’s Not by a Highway (Edingburgh, Scotland) 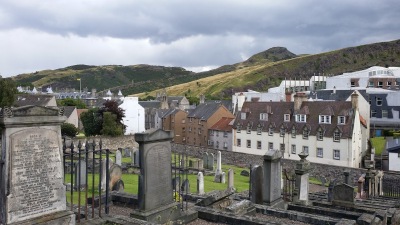 The New Calton Burial Ground was established around 1820 so it’s “new” only when compared to the Old Calton Burial Ground. According to Wikipedia, some of the bodies from the old cemetery were moved to the new so that “a number of stones predate the cemetery but are indeed true markers of those interred.”

In any event it’s a beautiful place, drawing me in for a visit even though I have no connection (that I’m aware of) to those interred.

It’s a stone’s throw from Holyrood Palace and a block from the Royal Mile. Its central location makes it unlike many of the cemeteries I’ve seen in the U.S., which are often in out-of-the way places where they and their annoying habit of reminding us of death can be compartmentalized and forgotten. And they’re often near highways so the living have easy access and can make speedy getaways.