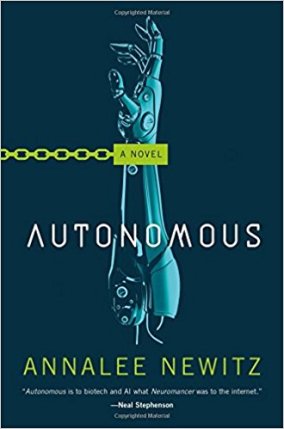 Jack Chen is a drug pirate, illegally fabricating patented pharmaceuticals in an underground lab. But when she discovers a deadly flaw in Big Pharma’s new productivity pill, corporate bosses hire a team of assassins to silence her.

Annalee Newitz’s novel Autonomous isn’t only a fast-paced cat-and-mouse story. It’s also an exploration of the rapaciousness of capitalism and its ability to turn everything, even freedom, into a commodity.

“I’ve written a lot about patents and how they affect innovation and how companies use patents to screw customers over,” Newitz, a journalist and founder of io9, told me on New Books in Science Fiction. In Autonomous, she highlights how “something dry and wonky like patent law has a life or death hold over us.”

Newitz also turns the idea of robot rebellion on its head. “I wanted to tweak this idea that is such a big cliché in science fiction about a society that builds a bunch of robots to be their slaves, and these slave robots rise up and enslave humanity.”

In Autonomous, which is set 150 years in the future, robots and human are in the same boat—both subject to servitude. “As soon as we can quantify something that we’re saying is equivalent to human life—we’re saying these robots are human equivalents—it’s super easy legally and ethically … to put a dollar value on human life.” And when that happens, “everyone will end up being enslaved,” she says.

The new episode of @NewBooksSciFi is ready! @Annaleen talks to me about her Nebula-nominated novel AUTONOMOUS, the life-and-death grip of capitalism & robot love: https://t.co/wzOYVV1IV4 @sfwa @torbooks #authorinterviews #scifi #artificialintelligence pic.twitter.com/dyAUogVOVr