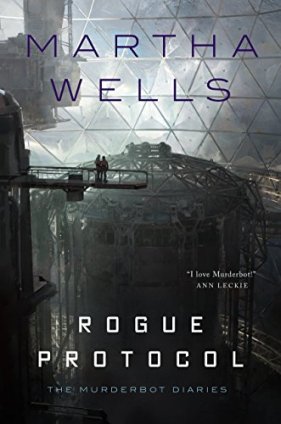 The “artificial” in artificial intelligence is easy to understand. But the meaning of “intelligence” is harder to define. How smart can an A.I. get? Can it teach itself, change its programming, become independent? Can it outfox its human inventors, be guided by self-interest, have feelings?

While companies like Google and Facebook are competing to develop A.I. technology, science fiction writers are light years ahead of them, finding answers to these questions in their imaginations.

One of the most engaging A.I.s in recent years is Martha Wells’ Murderbot, a people-averse, soap-opera loving, snark-spewing and highly efficient killing machine. The first book in Wells’ Murderbot Diaries, All Systems Red, earned numerous honors this year, including Nebula and Locus awards. It also made the short list for the Philip K. Dick and Hugo awards. The second and third books—Artificial Condition, which came out in May, and Rogue Protocol, out next week on Aug. 7—are equally engaging, taking Murderbot on a journey of self discovery that one hopes will eventually allow it a chance to retire from the business of saving human lives and spend its days watching its beloved “entertainment media” in peace.

“Does it have a place in this world?” is the question at the back of its mind, Wells says in her New Books in Science Fiction inerview. “It can’t go back to its corporate owner, which would destroy or erase it for going rogue; and it’s not sure it wants to go to a human who is offering it a home because it would still essentially be property.”

Despite its name, Murderbot is only murderous when work requires it. As it says on the first page of All Systems Red, “As a heartless killing machine, I was a terrible failure.” Thus, even though it could seek revenge against its human taskmasters, try to amass power or wreak havoc (since it has “borked” the programs that restrain its behavior), it voluntarily elects to continue performing the function for which it was designed—providing security to “small soft” humans. Why it so often says “yes” to a dangerous assignment when it really wants to hide in a closet is as much a mystery to it as our motivations are to us. Perhaps all forms of “intelligence,” artificial or otherwise, could benefit from a few sessions on an analyst’s couch.

Wells has incorporated aspects of herself in Murderbot, a fact that resonates with readers. “I have some problems with anxiety and OCD and I’ve put those into the character… and one of the interesting things that’s happened is that people who also have bad anxiety and have other issues say that they saw themselves in this character and that was heartwarming to me.”

The final book in the series of novellas, Exit Strategy, will be published in October.

Subscribe to New Books in Science Fiction (on Android)

Subscribe to New Books in Science Fiction (on Apple Podcasts)

While @Google and @facebook race to build #artificialintelligence, science fiction writers like @marthawells1 are light years ahead. I chat with the author of the Murderbot Diaries about #AI and more on the latest @newbooksscifi podcast: https://t.co/2nKJgVhtW9 pic.twitter.com/DySUKRGvJx