Sing Out Loud (the Fate of Our Species May Depend on it): Catherynne M. Valente On Space Opera‘s Humor and Humanity 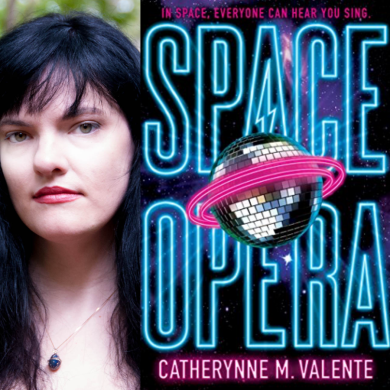 Shunning science fiction’s typical seriousness, Space Opera strives to be as ridiculous—and funny—as possible. “You can’t play ‘Eurovision in space’ straight,” Valente told me during our conversation on New Books in Science Fiction, and proves her point by turning Eurovision’s 50 nations and 100 million viewers into a competition that extends across the universe, attracting billions of viewers and outrageous alien performers—everything from sentient viruses and talented wormholes, to creatures that look like red pandas—but can travel through time—or like Microsoft’s much-maligned animated office assistant Clippy.

Space Opera’s intergalactic song contest was founded following the devastating Sentient Wars to promote amity among species (much as Eurovision was designed to promote understanding among nations—as well as promote the newfangled technology of TV—after two world wars).

Speaking of Eurovision, Valente says: “I think it’s one of the more extraordinary things that humanity has ever pulled off to look back at those two world wars and say, ‘Hey, let’s sing it out.’”

However, the stakes are a bit higher in Space Opera than in Eurovision since the contest at the heart of Valente’s story is designed to test whether humans (recently discovered by the rest of the universe) deserve to be welcomed into the community of sentient beings or, for the sake of the greater good, be obliterated from existence.

In the end, the job of saving homo sapiens falls to a washed up one-hit former British glam rock band called Decibel Jones and the Absolute Zeros.

Under the story’s playful surface are messages about diversity and the absurdity of one group claiming innate superiority over others when random luck is the most important factor underlying a species’ survival and success. Space Opera became “a frothy glittery book about rock and roll and comedy that has at its core a dark political vein going through it,” Valente says.

Valente is a fast writer (see her blog post “How to Write a Novel in 30 Days”) and was able to turn the Twitter dare into a manuscript in two and a half months. “If I take much longer, I start to hate myself and the book and don’t finish. I’m really always trying to outrace my own self-doubt. That’s why I write fast. It’s not because it’s fun.”

Her agent worked even faster than she did. He “still calls it the fastest deal in publishing because within 24 hours [of the first tweet] we had a contract.”