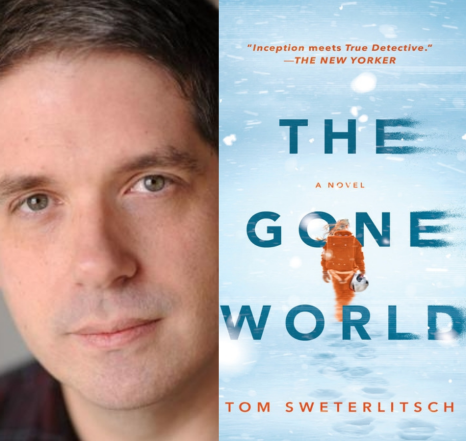 In the new episode of New Books in Science Fiction, I interview Tom Sweterlitsch about The Gone World (G.P. Putnam Son’s, 2018), which tells the story of a Navy investigator who travels to the future to solve present-day crimes.

The book opens with a brutal murder and a search for a missing girl, and maintains the pace of a chilling page-turner. But Sweterlitsch’s second novel is also an exploration of consciousness, identity, and reality.

The idea of using time travel to solve crimes emerged from a conversation the author had with his brother-in-law, a real-life special agent with the Naval Criminal Investigative Service.

“A lot of his investigations are essentially solved when a victim or someone who knows a criminal tells the investigators what happened and why, but if people don’t talk, the investigation becomes very difficult and sometimes impossible to solve,” Sweterlitsch says. “And so [my brother-in-law] was musing that if he could go forward in time, he could talk to a lot of the witnesses after the emotions had cooled, and they might be more willing to talk.”

Sweterlitsch gives his protagonist, Shannon Moss, the ability to jump forward in time, but any future she visits is only a possibility, one of an infinite number of options. That means the clues she collects aren’t hard-and-fast truths; at best, they are hints that may (or may not) allow her to solve a crime. Such futures are referred to as “Inadmissible Future Trajectories,” since the evidence they generate can’t be used to prosecute a case. The only certainty, as far as Moss and her fellow time-traveling agents are concerned, is the present—or “terra firma,” as they call it.

The notion that the present is a fixed reality remains a cornerstone of Moss’s beliefs even as the case of the missing girl grows more complex and Moss’s trips to the future start offering more questions than answers. Sweterlitsch introduces a host of fascinating concepts, such as “echoes”—duplicates brought from Inadmissible Future Trajectories who already exist in terra firma. “Thin spaces” are dangerous places where slivers of different times and places intersect, and “lensing” is the idea that a future trajectory is always warped by a time traveler’s psyche, much as dreams are shaped by the unconscious.

Sweterlitsch has found inspiration in everything from Dante’s Inferno to J.G. Ballard’s The Atrocity Exhibition to Alfonso Cuarón’s film Children of Men.

In the Inferno, “the punishment for the heretics is that they can see far off into the future but can’t see the present … And that was the perfect literary precedent for what I was hoping to write about in this novel in terms of the mechanism of time travel, but it also put the idea of heresy and belief into the book,” Sweterlitsch says. “A lot of characters express beliefs about the nature of the universe, but in almost all cases, those beliefs are proved incorrect by the novel itself… Reality around them is very slippery.”