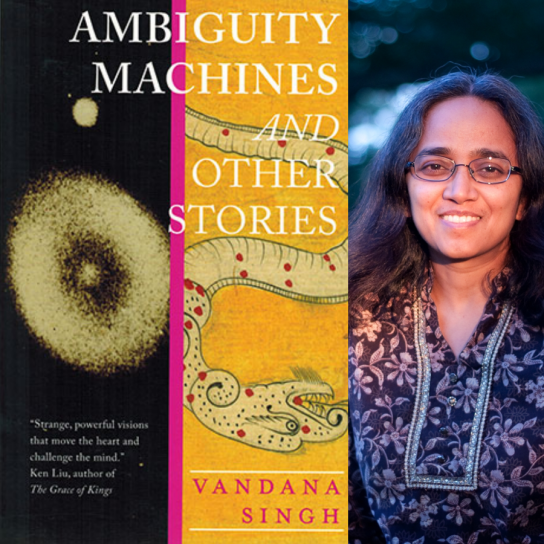 Vandana Singh, my guest on the latest New Books in Science Fiction episode, has made a career of studying both hard science and the far corners of creativity. It’s no surprise then that Ambiguity Machines and Other Stories (Small Beer Press, 2018), which was nominated for this year’s Philip K. Dick Award, reflects a fluency in multiple cultures—not just western and eastern, but the idioms of both particle physics and fantastical narratives that reach far beyond what science can (as of yet, at least) describe.

“One of the things that really bothers me about how we think about the world is that we split it up into all these different disciplines and fields that have impenetrable walls between them, and one of the reasons I love … writing science fiction is that it allows us to make those walls porous,” Singh tells me on the new episode of New Books in Science Fiction.

A reader might think that an expert in both particle physics and climate science would hesitate to write stories that explore impossibilities like time travel or machines “that cannot exist because they violate the known laws of reality” (the subject of the collection’s eponymous tale). But Singh embraces paradox and the simple truth that there’s still much about the universe that we don’t understand.

Themes that recur in her include nostalgia for childhood, mothers yearning for children (and children yearning for mothers), loneliness, and a sense that reality is slippery—that people and inanimate objects aren’t always what they seem.

Born and raised in New Delhi, Singh’s Ph.D. is in theoretical particle physics. She now lives near Boston, and is an associate professor and chair of the Department of Physics and Earth Science at Framingham State University. Ambiguity Machines is her second short story collection.

Several of the stories’ characters are, like Singh, female scientists, and their struggles to be taken seriously reflect real-world conditions.

“In the physical sciences, it’s still pretty tough for women,” says Singh, an assistant professor of physics at Framingham State University. “We have plenty of gender issues in India but the assumption that women can’t do as well or don’t have the ability … is not that strong or strident in India.” In the U.S., however, “the negative micro-messaging and sometimes macro-messaging I’ve come across has been ‘Well a woman, so what do you know?’ You’re automatically assumed to be more touchy-feely and … you must not be as good at science, which is utterly absurd.”

For Singh, physics and storytelling are intrinsically linked. “The way that I think about physics is really influenced by the way I think about story, and they’re different but they talk to each other,” she says. For instance, she’s used fiction “to explore concepts that help me also conceptualize climate science for the classroom and beyond, and think of or reframe different ways of thinking about climate change and what’s happening to our world. … I guess one analogy I could make is binocular vision. I have two ways of seeing the world, and they talk to each other so you get more depth.”

Physicist Vandana Singh uses science as a launching pad, weaving fantastical stories that explore the unknown. She talks w/ me on @NewBooksSciFi & @lithub about her acclaimed collection AMBIGUITY MACHINES and the porous wall between fiction & physics https://t.co/lztVUtfUr7