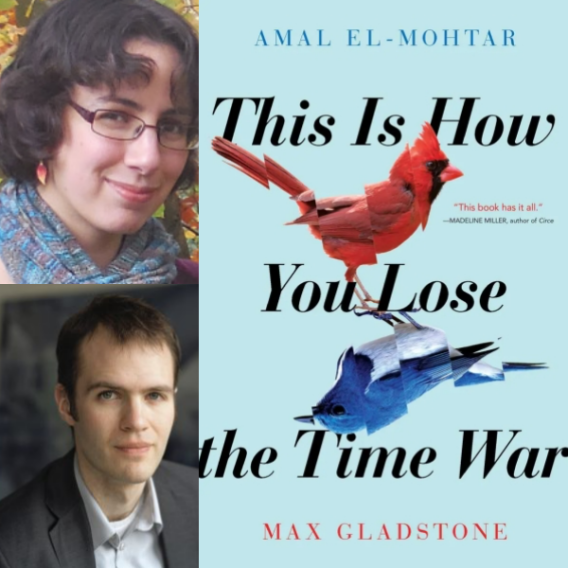 I was excited but nervous to talk to not just one but two great writers in a single go on the current episode of New Books in Science Fiction. There were technical challenges, especially since we were in three locations; I was particularly worried that we’d talk over each other. And then there’s the fact that Amal El-Mohtar and Max Gladstone are super smart. It’s hard enough to ask one smart person engaging questions to elicit answers that listeners will find engaging, but when you got two brilliant guests? Yikes.

Fortunately, Amal and Max made it easy for me. They have a great rapport, one forged in the triple fires of friendship, co-authorship, and now co-book marketing. I was worried that they’d already done enough joint appearances and interviews that the wouldn’t say anything fresh, but there were definitely a few moments where they surprised even each other with things they hadn’t said before.

Here’s my brief write-up about the episode as it appears on the New Books Network.

For Blue and Red—arch enemies at the center of Amal El-Mohtar and Max Gladstone’s epistolary novella, This is How You Lose the Time War—the only thing that endures after millennia of espionage and intrigue is love.

El-Mohtar and Gladstone are themselves avid letter writers who favor fountain pens and G. Lalo stationery over pixels and Gmail. So it was only natural that when they decided to collaborate on a novella about enemies-turned-inamoratas, they structured the tale as a correspondence.

Since Blue and Red can travel across timelines and live for eons, they compose their letters from materials that take a long time to manipulate, such as the rings of a tree, an owl pellet, lava flows, and sumac seeds.

El-Mohtar and Gladstone, on the other hand, were constrained by ordinary time and space. “He writes about four times as fast as I do. So it was it was tricky at first,” El-Mohtar says. “But then as we rounded off the first act, we started changing the pace of our respective writing. Max slowed down and I sped up. And then we were finishing at exactly the same time.”

Like the co-authors, the book’s characters also found a rhythm. Blue and Red start our as sworn enemies sent across timelines to fight on behalf of very different futures. But they find that they have more in common with each other than they do with the universes that they’ve promised to defend.

Red is “hungry for something more than what’s known,” Gladstone says. “In Blue, she finds not just someone who takes the world as seriously as she does, but someone who has the same depth of desire and focus and devotion to her chosen art, which is time war … who throws her beyond her own limits.”

“From both of their perspectives, there is a sense of alienation and insufficiency in the worlds that they come from,” El-Mohtar says. “Blue is someone who feels this constant gnawing, insatiable hunger that nothing in her world seems able to sate… until she starts being surprised by Red, this agent on the other side, who makes things hard for her.”