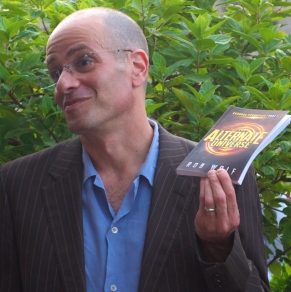 I was born in Chicago and raised in its suburbs.

Around the time I received my B.A. in English from Columbia, I met my husband and decided to stay in New York City. I worked for a year as a paralegal for Harlem Legal Services before landing the job I’d always dreamed of: newspaper reporter. After a year at the East Hampton (N.Y.) Star, I spent the next 10 years as a general news reporter, health and science reporter/columnist, and finally night city editor for the daily Staten Island Advance.

After that, I moved into the non-profit world, where I’m currently working with a team of dedicated, creative people at the Center for Court Innovation, where we are striving to make the justice system more fair. As Director of Communications, I produce videos, podcasts, and written reports.

I married my husband twice–once in the days before gay marriage was legal and again after it was. Somewhere in between the two ceremonies, we adopted our son, earning the titles that matter most to us: “Dad” and “Pop.”

My writing has appeared in numerous publications, from The New York Times to the literary journal Thema. A book I wrote when I was trying to make a go as a freelance writer, The Jury System, was singled out for excellence by the New York Public Library. I’ve received recognition from The Missouri Review for an audio essay about a babysitter I had when I was a kid, and my videos (like this one) have been honored by the National Council on Crime and Delinquency. My video about formerly incarcerated members of the Muscogee (Creek) Nation in Oklahoma was an official selection of the American Indian Film Festival, and From Defendant to Survivor, which I directed, won Best Documentary at the Human Trafficking Awareness Film Festival and was a finalist for a Media for a Just Society Award.

As host of New Books in Science Fiction on the popular New Books Network, I have interviewed dozens of wonderful authors about their work. Many of those  interviews have been featured on Literary Hub. I am also the author of the science fiction novels The Alternate Universe and its sequel, The Escape.

Praise for the Podcast

This is honestly one of the best interviews I’ve ever done. Nothing to do with me; Rob asked some genuinely insightful questions and made me look at my own work in new ways.

It’s such a pleasure to talk about UNKINDNESS with someone who’d thought so deeply about the world of the book.

—Rivers Solomon, author of AN UNKINDNESS OF GHOSTS

The podcast New Books In Science Fiction, hosted by Rob Wolf, is … one of the podcasts that consistently guide listeners to find deeper understanding and appreciation of genre works. Wolf sits down with an author who has a new novel … and has an in-depth one-on-one chat with them about the book and their influences, about their career, and about the intellectual effort that went into the book. Often, the result is revelatory. An expert interviewer, Wolf approaches each author with an earnest enthusiasm that is frankly endearing. He asks thoughtful, succinct questions that drive at the heart of the matter, and gives his guests the time to respond fully and completely.

Praise for The Alternate Universe

If I ever travel to an alternate universe, I want Claude and Carolien along for the ride. They’re tough, resourceful, and fun—perfect companions for a journey through space-time.

—Carolyn Turgeon, author of MERMAID and editor-in-chief of Faerie Magazine

Rob Wolf gives us an alternate universe where a lot is different but some things remain the same: guys still get crushes and fall in love… and friends are willing to go to the end of time for one another. Fast-paced and incredibly smart, you will never look at life in quite the same way again.

—Jennifer Belle, author of GOING DOWN and HIGH MAINTENANCE