My interview with author and futurist Brenda Cooper is the second of my conversations with nominees for the 2016 Philip K. Dick Award. 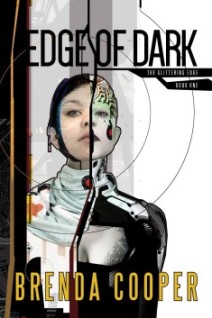 Cooper’s novel Edge of Dark (Pyr, 2015) is set in a solar system where human are forced to confront a civilization they’d long ago banished: a race of super-beings who evolved from humans into cyborgs.

The idea of implanting human intelligence into an artificial body is not new. But Cooper gives it a fresh twist by making the ethics of human-robot blending the central theme of her book. The super-beings (called variously ice pirates and the Next) are returning uninvited from their banishment and, in addition to seeking access to natural resources, are offering immortality to anyone who wants it.

Cooper sees Edge of Dark as part of a conversation about the evolution of the human race. “I’m fascinated by transhumanism what we’re going to become,” Cooper says. “I do think that we’re becoming something different… I’m exploring what the human soul might be about.”

All six PDK-nominated authors participated in a joint podcast where they interview each other. It’s available here.