Podcast No. 14: 200 Years after the Luddite Revolution 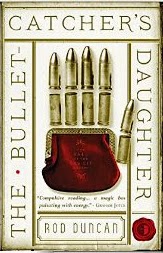 While science fiction often seeks to imagine the impact of new science on the future, Rod Duncan explores an opposite: what happens when science remains frozen in the past.

In The Bullet-Catcher’s Daughter, the Luddites prevailed in their protests 200 years ago against labor-replacing machinery, leaving science and culture stuck for generations in a Victorian-like age.

Against this backdrop, Duncan introduces Elizabeth Barnabus, who outmaneuvers the restrictions placed on her as a single woman pretending (with the help of quick-change-artist skills) to be her own brother. “Gender identity and gender presentation is a theme that runs through Bullet-Catcher’s Daughter because in order to do certain things in her world she needs at times to cross-dress and do it in a convincing way,” Duncan says in his interview with me on New Books in Science Fiction and Fantasy.

Elizabeth’s mastery of disguise—and her knowledge of deception acquired from her circus-owning father—allow her to earn a living as a private investigator and accept an assignment that brings her face to face with agents of the International Patent Office.

In January, The Bullet-Catcher’s Daughter was nominated for the Philip K. Dick Award, validating Duncan’s decision to take a stab at science fiction. “I like to let ideas play in an imagined world and see what happens,” he says.

Asked if he found it difficult to write a first-person narrative in a woman’s voice, Duncan points out that all writers must overcome countless barriers to fully enter the minds of their characters.

“The book is about illusion and any writer trying to write from the point of view of someone different from themselves is trying to pull off some kind of illusion; they are trying with smoke and mirrors to seem as if they are realistically that person. Now sometimes that person may be different in all kinds of … ways from the writer.”

In the end, Duncan says that all writers, like his protagonist Elizabeth, are cross-dressers “in a psychological sense because we have to put ourselves into the minds of other people.”

The interview touches on the conjuring illusion “the bullet catch” from which the book derives its title. Ned Ludd and the Luddites also come up.

The conversation concludes with a mention of Duncan’s role in the movie Zombie Undead. The trailer is on Rotten Tomatoes and the entire film in on YouTube.