Trees Advocate for Themselves in Karl Schroeder’s Stealing Worlds 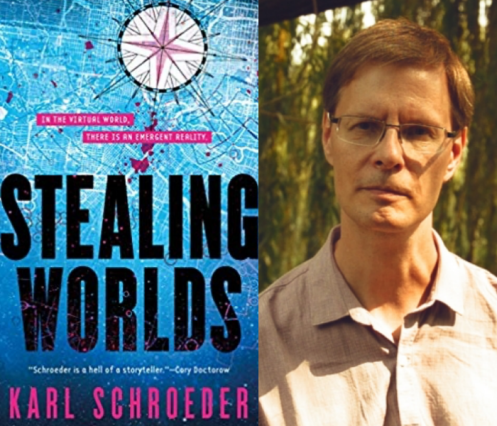 To catch the people who killed her environmentalist father, the main character of Karl Schroeder’s Stealing Worlds disappears into a virtual world of overlapping LARPs—live action role-playing games. But Sura Neelin soon discovers that the LARPs are more than games. They’re also an underground economy that meets players’ needs for food, shelter, services and everything else the non-virtual world also provides.

Among the concepts she encounters is the idea that software can provide inanimate objects with self-sovereignty, allowing them to take charge of their own destinies. Sura discovers that self-sovereignty can apply to things like a river or a forest, giving them the ability to advocate for their own health and well-being—essentially putting them on an equal footing with humans who might try to exploit them.

For Schroeder, who is both a writer and professional futurist, science fiction can be both entertainment and a laboratory to explore ideas like self-sovereignty. He’s been hired by governments and companies to write fictional scenarios to test the implications of new concepts and technologies. “What stories allow you to do is bring together immense numbers of different ideas and get them all spinning and interacting at the same time without people losing track of what’s going on,” he tells me on latest episode of New Books in Science Fiction. “You can pile immense amounts of complexity into a narrative and people will understand it intuitively and seamlessly in a way that they will not understand a 400-page report.”