Interview: Andy Weir’s The Martian is a Story of Ingenuity for both Astronaut and Author 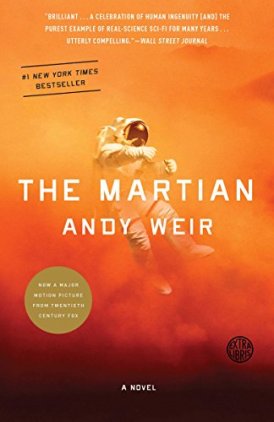 Strand a man on Mars with only a fraction of the supplies he needs to survive and what do you get? A bestseller.

Andy Weir‘s The Martian (Crown, 2014) has been on a journey almost as remarkable as its protagonist, but instead of surviving on an airless, waterless planet, The Martian has survived the inhospitable environment known as publishing, floating near the top of bestseller lists since the moment it was published.

The overall plot is easy to summarize: A manned mission to Mars is scheduled to last 31 days but is aborted in the middle of a life-threatening windstorm. The crew’s botanist-engineer Mark Watney is left for dead as the crew rushes to escape. Watney spends the rest of the book figuring out how to survive while the experts at NASA spend their time figuring out if they can rescue him.

Describing Watney’s strategies for survival are a bit more complicated. Everything that remains from the aborted mission is fair game for Watney’s imaginative repurposing. One by one, he turns the supplies and equipment that had been designed for a month-long sedentary encampment into tools to help him last hundreds of days while traveling thousands of kilometers across an airless, foodless terrain.

Watney turns oxygen to water, sterile Martian dust into fertile Earth-like soil, a vehicle meant for short roving exploration into a cross-country tow-truck; these and other transformations draw on a deep knowledge of science that puts the “hard” in the genre known as hard science fiction.

“I’m pretty nit-picky when it comes to science,” Weir tells me in his New Books in Science Fiction interview. “What bothers me is when there are blatant science errors [in science fiction]… like when someone takes off his helmet and holds his breath when he’s on the surface of Mars.”

Just as Weir has infused real science into his fiction, his fiction has returned the favor by transforming his real life into the stuff of fantasy. The success of The Martian has allowed him to morph from a writer-hobbyist, who originally self-published The Martian with zero expectation of financial reward, into a full-time author-superstar whose book is being developed for film by Ridley Scott and Matt Damon.

Related links:
Here are links to some things mentioned in the interview: